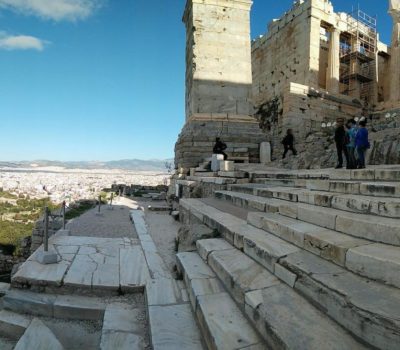 Seravo has quite a long history supporting WordPress Communities. We have been giving speeches, sponsoring and attending different WordCamps for many years now and thus in Finland we are considered “one of the regulars”. However, we feel like we can both learn and help more by attending and supporting also WordCamps outside Finland (in addition to meeting a lot of new, fellow WordPressers!). Bearing that in mind, we have visited local WordCamps in for example Manchester, Stockholm and Copenhagen and of course WordCamp Europe that was held this year in Paris.

Our latest “addition” to this list was WordCamp Athens, that took place last weekend. Seravo’s CEO, Otto Kekäläinen, was accepted to give a talk there about improving WordPress performance with Xdebug and PHP profiling, so we decided that it would be a good idea to sponsor the event, too. Finally it was three people from the Seravo team that boarded a plane towards sunny Greece hoping to really get to know the Greek WordPress Community.

The event exceeded all our expectations. First of all, it was a proof of the unity of the local Community: over 650 people gathered from all over Greece to the conference and also the organizing team was consisted of representatives from different cities. The locals are definitely really proud of their WordCamp and after this experience, we are too! It was an intense weekend with so many interesting presentations, things to learn and new people to meet. We especially enjoyed the talks of Ivelina Dimova, about the magic of advanced debugging and that of Alexandra Anghel, that covered building an e-commerce progressive web app with React and WooCommerce. We got lots of ideas to take home from both of them (and of course of the other talks we heard as well). We hope that Otto’s presentation was equally helpful to a lot of people, too. The reason why we love WordCamps so much is exactly that – sharing what you know so that it can help others.

As you can imagine, the weekend went by super fast. In addition to attending the conference we also decided to take the time to explore Athens and its beautiful sights as much as we could. Unfortunately our stay in Greece was rather short this time but I think we used it well. Especially Acropolis was such a unique experience that we wouldn’t have wanted to miss it and will probably remember it for a long time. All of us were first time visitors in Greece and this weekend definitely left us wanting more!

The next WordCamp in our schedule is going to be in our beloved Finland, in Jyväskylä in February. It is going to be especially developer-oriented, which we are really excited about, so anyone from in- or outside of Finland with that mindset is more than welcome to join in!