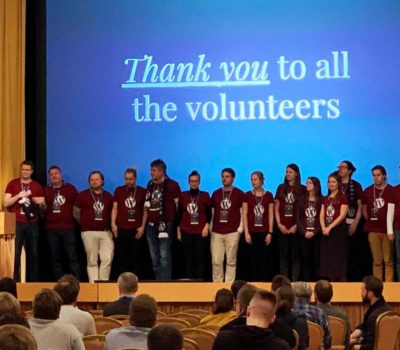 WordCamp Nordic, the first ever regional WordCamp for the Nordic countries, took place in March 2019. It was also the biggest and most international WordCamp ever organized on Finnish soil with over 600 targeted attendees. As usual, Seravo was an active participant, by both being a gold sponsor and attending the event with a delegation of 12 people.

In addition to sponsoring, speaking and taking part in the event as participants, this time Seravo also had a strong presence in the organizing team with two people. Johan was already an experienced organizer through WordCamp Stockholm, but for me this was the first time. In this post I will share my experience behind the scenes with the hope that it will encourage someone else to do the same!

This is how it started

I’ll try not to dive too deep into history but I’ll begin with how I originally got involved with the WordPress community. The year was 2016 and I had just started at my current employer, Seravo. Before that I had no idea that such a community even existed and I have understood that many people share the same experience. As a very non-technical person (I have graduated from business studies) it took me some time to find my place in the community because especially in Finland most of the active members are developers.

This insecurity has fortunately passed with time. I realized that there really is a place for other kinds of people as well, even if it doesn’t necessarily look like that with the first glance. It is also interesting how the communities in different places differ from each other. For instance, based on my conversations in Barcelona, there it’s completely the opposite: most of the community members are basic users and it is actually quite hard to get the developers excited about it. Both communities seem to have something to learn from each other on how to attract the not so obvious crowds in their country to WordPress events.

After attending multiple meetups and WordCamps both in Finland and abroad I started to play with the idea of getting involved in organizing them myself. During my University studies I enjoyed organizing both big and small events so why not combine that experience to my current situation? I had heard some rumours of a possible WordCamp Nordic for a while but it was only around a year ago that they officially started looking for organizers, conveniently timed with my longing to get back with organizing events. So I applied and got accepted.

The first thing for a team to do is usually to divide the tasks between its members. We had the possibility to make wishes but naturally also any previous organizing experience was taken into account. As a first-timer I managed to get both what I had wished for, tasks with a moderate level of difficulty: social events (after party and volunteer’s dinner) and travel and safety (which mostly meant writing blog content to help the attendees coming outside of Finland). I shared both tasks with more experienced team members, Niko and Sonja. The head organizer, Marco, took care of the bigger picture and coordinated the work of the eleven team members. Despite having his plate full he was always ready to give us a hand when needed.

I was actually surprised that the workload for my tasks was not as big as I had expected. Of course there were things to do but organizing the after party and the dinner didn’t require that much work beforehand, especially as we decided to have the party in the same venue as the conference itself. Planning and writing the blog content, on the other hand, was quite easy to organize to not interfere with my work duties so I didn’t have issues on that front, either. Based on this experience I can warmly recommend everyone afraid of the added workload to at least consider volunteering again. It’s possible to manage the workload by asking for simpler tasks that take less of your time. And every bit of work you can do certainly helps!

Due to the international nature of the event, the team was also formed of participants from almost every Nordic country. The weekly meetings were held in Hangouts or Slack, most of the communicating was thus done virtually. Thanks to the positive attitude and independent and proactive working styles of everyone involved everything went smoothly without any considerable issues.

Before and during the event

Naturally the workload, excitement and even stress started to increase when the event was approaching. At least I felt that during the week preceding the WordCamp. I almost couldn’t talk about anything else at work. With these kinds of events most of the work gets done right before and during the actual event, so despite good planning beforehand there were still quite a lot of details to put into place at this point. An additional aspect of this was also that most of the organizing team met in real life for the first time on the morning of the Contributor Day. It was basically a quick “Hi, nice to meet you in person” and then back to work.

From my part the event actually started the previous night, with a warm-up event organized by the WordPress Helsinki meetup group. The idea was to just hang out and get excited about the following day. I had a great time and felt that it was a nice way to get to know some of the conference guests already before the event, especially considering that most of my time during the Contributor Day and the main event went to running errands and taking care of other organizing matters. I don’t consider myself to be someone that gets nervous easily but there must have been something like that going on because I didn’t sleep very well the night before the Contributor Day.

The actual Contributor Day started for me quite early and in a little chaotic fashion at the registration desk. There was a lot to do since there were more people willing to attend than we had thought and also the badges unfortunately hadn’t arrived neatly alphabetized so it took some time to go through them. Thankfully the participants were as excited as us so a little hassle didn’t seem to bother anyone.

Generally the day went on in a pretty relaxing manner and in the afternoon I headed towards the actual conference venue, Paasitorni, with a couple other organizers to help set it up. During the evening also some sponsors and speakers came by to prepare for the next day so there was a lot to do. Lastly, during the evening we had the volunteer’s dinner at Rosso, where almost the whole restaurant was reserved for us. It might be that there won’t be that big of a crowd there anytime soon!

The main event itself seemed to pass by in a blink of an eye because there was so much to do. The whole team had been given different tasks for the day ranging from running the registration desk all the way to presenting the speakers at the stage. I spent the first and the busiest hours of the day at the registration and later in the day I spent some time taking care of the speakers room. Fortunately I also had some free time, so I was able to listen to a couple of talks and go say hi to my colleagues from Seravo at our sponsor booth.

The day was very different from the ones that I had spent in other WordCamps as just a participant since I didn’t have as much time to socialize with other conference guests that I normally do. Thankfully there was a chance to do just that later on in the evening during the after party. After cleaning up the venue itself and taking care of other responsibilities, us organizers were also able to just hang out and enjoy ourselves. I had been a little nervous beforehand of how the restaurant space would work for the after party but it was actually really nice after some tables had been removed and the lights dimmed. I was having such a good time that I stayed up pretty late that night. After the official after party there were others in different pubs and bars around Helsinki.

The WordCamp continued unofficially the following day with an Activity Day. That’s how I ended up to Finnish National Museum for the first time in my life. Those things so often get skipped simply because they feel “so close that I’ll get a chance to do that some other time”. I might have to go again since we didn’t have time to go through the entire museum. The rest of the activities (including sauna) I had to leave out this time due to my friend having her 30th birthday party that night. But even without the sauna the day was really nice.

The greatest achievement of this WordCamp was definitely the fact that it happened. It was such an effort of all the Nordic communities and there had been talk about it for so long already. It was amazing to see how beautifully it all came together – it felt even better knowing that I had played a small part in it. Hopefully the tradition of WordCamp Nordic will go on and next time it will be us Finns travelling to greet some other community.

For my part I can tell you that the saying “the more you do, the more you want” seems to hold some truth and I would definitely do it again. Organizing a WordCamp is a unique experience and just like with the community itself, it’s pretty easy to get hooked.

The next WordCamp that Seravo will be attending will be the traditional WordCamp Europe, organized this year in Berlin from the 20th to the 22nd of June. We will be there as a sponsor and with a team of at least four people. Supporting open source and the WordPress community is very important for us and WordCamps are a great way of doing that. Hope to see you all there!