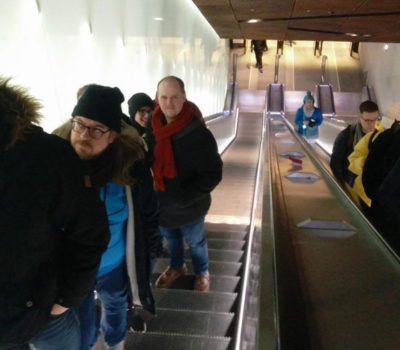 If you have any connection with the WordPress community in Finland it was hard to miss the first ever pan-Nordic WordCamp held in Helsinki last week. As we make it our business to contribute to WordPress related events, we acted as the gold sponsor, had two of us volunteer as organisers, and our CEO Otto had the honor of being selected as one the speakers at the event.

Seravo attended the event with a delegation of twelve people. In fact, our orange and blue hoodies were apparently so visible in the crowd that some people estimated there must have been fifty of us at the event. Or perhaps we were just moving about so actively that it was hard to miss us?

The three-day event started with a Contributor Day, which gave us a great chance to give back to the community and meet some wonderful people working with WordPress, each in their own way. The day featured teams covering topics from starter themes and design to hosting and documentation, and more.

Many of us joined the combined Accessibility and Polyglots teams where we spent the day captioning videos on wordpress.tv. If you’ve never tried to do captioning yourself, you might be surprised how time consuming it can be. Out of the sixteen people in the room only one of us actually finished the clip they were working with, albeit a one that they were intimately familiar with as it was one of their own talks at an earlier WordCamp.

During the actual day we split our time with manning our booth and listening to the many excellent talks. The talks that stuck with me personally the most were Elisa Heikura‘s talk about how to deal with feedback, a skill that I really do need to learn next, Rian Rietveld’s wonderful walk-through of how effortless it actually is to use ARIA, and Continuous integration and deployment with WordPress by Bjørn Johansen that scratched my build engineering itch (yes, I used to do that for a living eons ago).

There were certainly plenty more talks worth a mention but with the two simultaneous tracks, many interesting people to talk to and the many, many stairs at the venue there was no way one could catch them all. One talk that you should all check out once it hits wordpress.tv, however, is the one by our very own Otto Kekäläinen. He captivated the audience with a modern thriller reminiscent of such modern TV classics as Law & Order and 24, only about a security breach that we had to deal with one beautiful day back in November 2018.

Some of us rounded up the event by attending the Activity Day, which gave us a chance to meet people in slightly different settings, from a choice of tours around Helsinki to one of the hottest saunas in town. This left us hungry for more, however. We are anxiously waiting for WordCamp Europe in June, that we are coincidentally also sponsoring, and before that we might have something in store for you around the Global WordPress Translation Day coming in May. Watch this space.